Within twenty miles of each other are two iconic sites, each a testimony to different elements of the American spirit. Both are very close to the walking route we’ve chosen on the GAP, so we took time to visit them.

The first is the memorial to Flight 93, near Shanksville, PA. This, of course, was the United flight that had been hijacked on September 11, 2001, and was on its way to DC – presumably to crash into the Capitol – when the passengers and crew resisted and gave their lives in sacrifice as the plane plummeted to the earth in an area that was an abandoned mine. The land was acquired by the National Park Service, and was made into an extraordinary memorial site. Pictures, of course, don’t do it justice, but here are some, anyway.

As you can see, the day was cold, grey, and wet. There were only a handful of other visitors, adding to the austere, yet somewhat serene feeling of the place. The visitors’ center was done as tastefully and respectfully as one could hope, given the context. The architecture is stark and stunning. 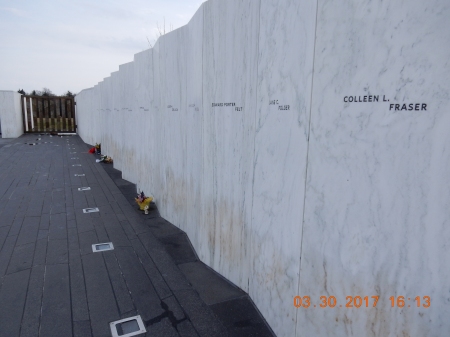 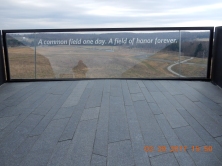 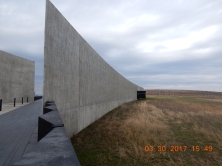 While every American can remember where they were on September 11, 2001, we each have a very personal and deeply compelling feeling about that day. At that time, I was the Technical Director to the Oceanographer of the Navy, with an office at the Naval Observatory in NW DC. I would typically spend 2 or 3 days at the Pentagon, and was usually taken there by my driver, Luke Adams. On 9/11, Luke and I were on our way toward the Pentagon at about 0845. As we approached the Potomac River we saw a black plume rising from the building. We knew the World Trade Center in New York had already been hit. We turned back toward the Observatory. The next day we learned that two sailors from our command, working at the Naval Ice Center detachment in the Pentagon, had been killed (Petty Officers Flocco and Earhardt). A couple of days later, CAPT Chris Gunderson and I attended a heart-wrenching memorial service at the Pentagon. The combined feelings of grief and camaraderie were like nothing I’d ever felt before. Shortly after that, while the Pentagon was still being cleaned up, I walked through the building to a meeting. I wrote a short essay on that day, and include it here as well. It follows:

I went back to the Pentagon today. I’m usually there a couple of times each week, but I had not been there since 11 SEP, and today’s meeting was something of a necessary catharsis. As some of you know, our command lost two petty officers in the attack. They were, in fact, the first two confirmed Navy dead … both of them young men. They’ll be buried this weekend, with full honors, in their respective home towns in New York and Kentucky.

You’ve all read of the heroics and stalwart professionalism of the people in the Pentagon, military and civilian alike. There’s a more personal side, which I had not fully appreciated until today. You need to know about that as well.

At our meeting a good friend of mine, a Navy Commander, broke down in tears as she remembered her lost sailors (those two young men reported directly to her) – it was obvious she’d spent most of the last week in duress. She described the scene of the attack in detail, her description made even more realistic by the lingering acrid aroma that still permeates the Pentagon – an awful smell, the origins of which one can’t even begin to imagine.

The quiet in the Pentagon was equally striking. Normally a bustling lively place, the dining room was empty. The halls and corridors had only scattered groups of people. Usually at 7:30 AM the building is a madhouse. The section of the building that housed the Navy Command Center is now cordoned off, and the void that was left from the attack creates an eerie darkness perceptible from the long views afforded in the outermost “E-ring”. The central courtyard has been cut in half with wire fencing, and temporary comfort stations have been set up where rescue/recovery workers can grab a cup of coffee. Military police guard many of the intersections inside the building. They all look somber but confident.

But there are some remarkable symbols of the enduring American spirit. As you exit the building you pass a table with patriotic bumper stickers, free for the taking … and people are taking them.   In what was the parking lot beside the west side of the building – where the plane crashed – there’s a fleet of mobile McDonalds and Burger King vans, donating food for the rescue/recovery workers. And atop the Pentagon there’s a steady stream of flags being flown and removed, to be delivered to the families of those who perished in the attack.

So go back to work. Be proud. Think of that Navy Commander fighting off the tears, and remember that our American spirit is still strong.

We kept walking on the GAP, and within a day or two – with nearly freezing temperatures and persistent rain – we made it to Ohiopyle, PA, just a few miles from Fallingwater. This former home of the Kauffmans of Pittsburgh, was designed by Frank Lloyd Wright in 1935. What an incredible place! The “organic” design integrates the home into the rocks and waters of the gorgeous Pennsylvania Laurel Highlands. It’s also a typical Wright design, in that beauty and elegance of form take priority over such elements of functionality as being leakproof. Little pails are strategically placed throughout the home, to catch the drips! Our guide said you can always tell a Wright design by the buckets. Nevertheless, it was a real treat to finally see Fallingwater, after having heard so much about it all of my life. 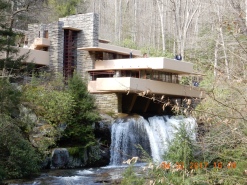 A couple of days later we treated ourselves to a tour of Wright’s other home in the area, Kentuck Knob (yes, Kentuck).  This home was owned by the Hagans of ice cream and dairy fame.  The home is truly unique in that there are only two right angles in the whole place.  It’s built of Pennsylvania sandstone, Carolina cypress, and Maryland flagstone.  The home sits on a scenic hilltop, and the current owners (from Britain) have sprinkled the property with massive modern sculptures, including one by Claes Oldenburg.  Alanna and I finished the day by visiting the falls on the Youghiogheny River in Ohiopyle. 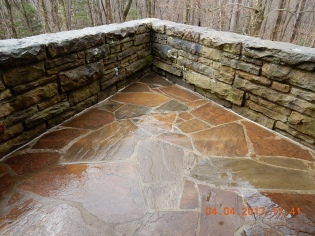 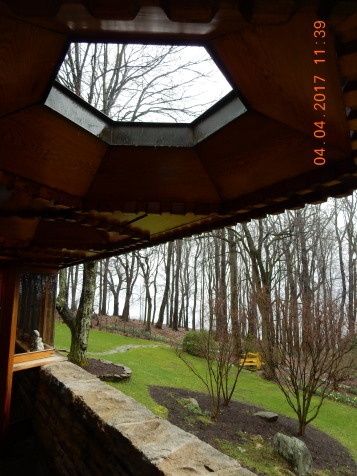 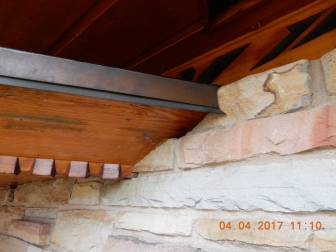 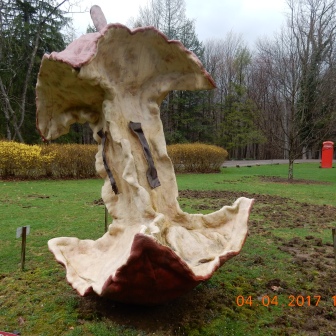 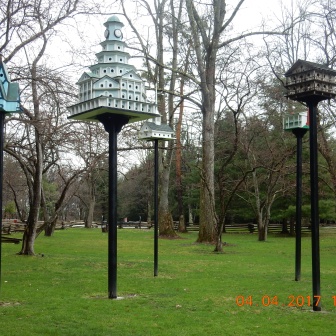 So, this week has been a unique walk through Americana, albeit not exactly baseball, hotdogs, and apple pie.  The stark juxtaposition of the basest behavior of man (terrorism) with the selfless heroism of typical Americans (United Flight 93), placed only a few miles from emblems of American modern creativity (Fallingwater and Kentuck Knob), has made this week one that I will not soon forget.

© Rick Spinrad and rickspinrad.com, 2015-2018. Unauthorized use and/or duplication of this material without express and written permission from this site’s author and owner is strictly prohibited. Excerpts and links may be used, provided that full and clear credit is given to Rick Spinrad and rickspinrad.com with appropriate and specific direction to the original content.
Loading Comments...
Comment
×
%d bloggers like this: